Dr. Guillaume Zagury, based in Shanghai, a specialist in international public health and health innovations, comments for the Community onthe evolution of the epidemic for more than three months, and provides  a preview of the elements of understanding on its “country and regions analysis” and predictable consequences (experiments of SARS in 2003 and Covid-19 in China).

A remarkable multidisciplinary teamallows the realization of this analysis which is intended to be factual and objective (by the way, do not hesitate to join us: mail  below):”anysuccess is collective”.”.

Beyond the volunteer skills, this project wasmade possible by the support of our citizens’ vision patrons: the Paul Bennetot Foundation (Matmut Foundation under the aegis of the Foundation of the Future), B Square, Tag Advisory, Daxue Consulting, as well as various companions (Jérôme, Dr BenoîtRossignol, Gilles Langourieux, Sabrina  Rocca… )

All our illustrations created for more than 100 days, will soon be available on our website and you can download a large part of them. (www.covidminute.com).

But slow: still 500 new hospitalizations per day  despite 55  days of confinement.

I.3 France – Forecast for deconfinement: resuscitation beds available – the issue from 16 May: the curative system will have a hard time with a “seconde vague”  C ()withthe C (-) that will gradually return (possible tension from 16 May)

I.6 World: Latin America in epidemic phase with a number of new daily cases

Tending to reach the USA (with probable under-reporting …): 20% versus 30% of new cases reported (with the usual reserves on this type of dependent)

Indicator certainly not perfect (because of the tests, population density, the median age of the country …) but available, to assess the impact of “country” strategies.

Beware, however, of too hasty comparisons (see Finland or Australia to low population density versus Singapore or New York)

With the Collaboration of Dr. Bachir Athmani and Carole Gabay

Ⅱ. A.1 Until now, children have been considered high sources of transmission

Underlying argument being the case of influenza

Ⅱ. A.2 Current studies now run counter to this principle:

It turns out that carrying in children is equivalent to that of adults, in terms of viral load, but that thetransmissioncapacity would be low.

The case of the 2 children”contaminated with Contamines (!)” is an example: the two classes attended had shown no other positive cases.

Ⅱ. A.3 This is also true for many points where we observe a lack of consensus:

Ⅱ. A.4 A specificity of this pandemic is thus the media speed (following the rise of ICT and especially “Social Media”), which is upsetting the  medical-scientific world

1/ Science needs time to establish a truth (via results found in time and space), but the context of “viral warfare” requires prioritizing all potential avenues.

Ⅱ. A.5 On a personal level: the over-information observed (for example: more than 5,000 Covid scientific papers in 4 months) is faster than the human ability to analyze it

This thus generates for decision-makers a “feeling of paralysis” following numerous contradictory data (“what was true yesterday is not necessarily true today”), and evolutionary (appearance of a new rupture therapy for example…).

In total, technological tools (NTIC and social media) allow for an acceleration of knowledge (“globalization of research”) and its dissemination, but also generate decision-making complexity through the over-information produced.

A west Es gradient- on the number of recorded deaths (May 9): 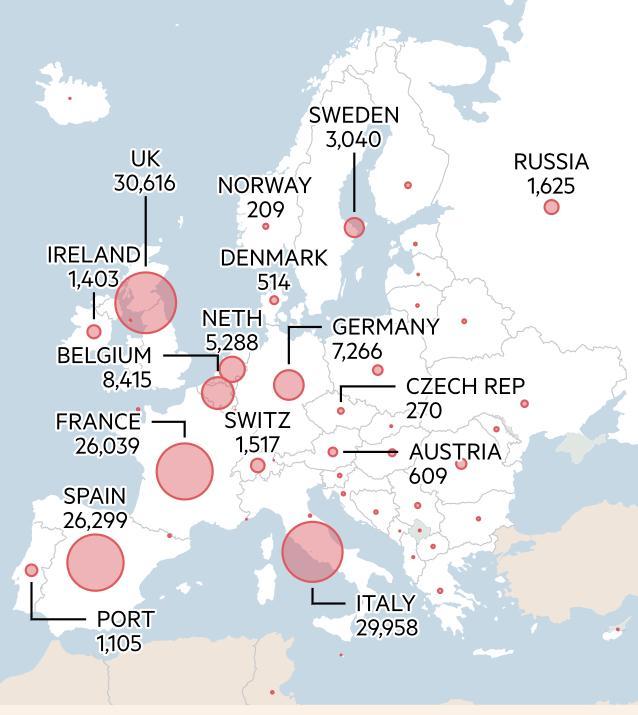 At the regional level: cases of hospitalizations

Ⅱ. D WORLD: The 2 Americas and Russia in epidemic phase with about 20% of new cases

By continent: The USA and Latin America (10% of current and probable cases underreporting):  54% of cases reportedworldwide

By continent: Latin America and Russia also in epidemic phase

All the tables of our Data Analysis Expert, Carole Gabay, on the website: www.covidminute.com, in the “Resources” section.